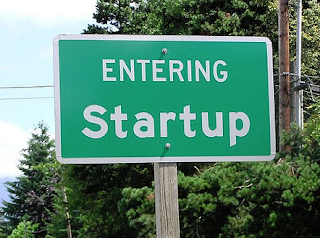 I got some sage advice yesterday from an industry colleague I love and respect. He's one of these "crazy" ones I idolize... the misfits who see things differently... the square pegs in round holes kind of dudes... who changes things. Who pushes things forward.

The advice was more for me to apply toward my being on the air everyday, battling distractions and staying focused and on fire and whatnot... but it might as well apply to life.

And, since my work life balance being out of whack has taken a toll, I applied the advice to both work... and life.

"Treat it like a startup," he wrote me in an email. He then explained to me that he tells his team to treat what we do like we're doing it at a brand new place... and to have fun with it.

What simple - yet elegantly powerful - advice.

If we treat what we're doing like it's the beginning. Like we have nothing to lose and everything to gain... and if we have fun doing it... it will break the chill of complacency and loose the fires of innovation, passion and creativity.

I applied the advice. The results were - and continue to be - instantaneous.

Sure, I have a lot going on in life. We all do. But I'm going to work harder on staying in "startup" mode... because it's more fun that way!

Photo: Mike/Creative Commons/Flickr. Photo modified to show only the sign of town.

Posted by Unknown at 3:21 PM No comments:

HATE is NOT a marketing strategy...


Hate is NOT a marketing strategy. Can you believe some radio station would put up this billboard mocking Caitlyn Jenner and her #transition?
Posted by HOT 99.5 on Tuesday, August 4, 2015

Posted by Unknown at 5:28 PM No comments:


I don't remember how long I'd been at FM97 on the first tour of duty in Lancaster. It wasn't long. A great man - and great programmer - Jordan Walsh - came to me and said, "Do you mind if this jock from 98YCR comes in to say goodbye, he didn't get to have a last show on his station... and he's going on to a pretty big gig in a big market... and it's just the right thing to do..."


98YCR was this Top 40 like FM97 was, only, they were YORK's Power Hit station. They had a PD named Davey Crockett, which, to me, was an act of religious disrespect, being from Texas and knowing what Davey Crockett gave for Texas freedom at the Alamo. Then, they had someone named Captain Connors, which, well, I didn't understand much.


Harrisburg also had a Top 40, so it made for a unique sort of situation. Three full signal stations within 45 minutes of each other. Serving three markets which were so unique and different... yet we all got into each other's business. So it created a climate for some fun on-air ribbing from time to time.


I flat out made fun of "non-stop power plays..." And I was young and stupid, more inclined to shoot first and beg for forgiveness and permission after the fact...


Into our studio on top of a liquor store on Queen Street in Amish Paradise walked JJ Kinkaid. That was the first time I'd met a man who would be so enter-twined to my professional life in so many ways to my career over the years and miles. And, in my daypart and on my show, he got to say goodbye to the region which he'd entertained for so many years before I'd arrived in town from Hot 97, WBHT-FM in Wilkes-Barre/Scranton.


God I wish I had that aircheck now. Mike Klein was there. The studio was electric. It was great radio... and a great thing to be a part of... at a time when radio was fun, irreverent, ridiculous, entertaining and at times, full of rule-breaking fun...


JJ went on to KDWB in Minneapolis. Then, to KISS in Dallas. And, then, to Z100 in New York where he reigned in Afternoons after the legendary Paul "Cubby" Bryant from the "Top of the Empire State Building..."


I went on to FLZ, then to Columbia, which is, ironically a town with same name as JJ's, although mine was in South Carolina and his was in Maryland. And then, right around the same time JJ climbed to the top of the Gorilla Building, I landed in the Capitol City of the Free World...


Flash forward to Miami. A few years later, JJ and I were in town for a "thing" for our company. We reconnected, and caught up, and chatted about life, our careers and more since. While eating some Burger King burgers, I found a guy who became my "call-to-vent" brother, my "what-are-we-doing" brother, and my "let's just juggle with mittens on" consigliere who was always a text or a quick call away.


I'll miss being able to text him - or getting a text from him - in real time while we were hosting Afternoons up and down 95 on the East Coast of the greatest country on the planet.


He's a true radio fan, a man who loves - with a passion - the art of what we do. He believes very strongly in what makes our art great - and he also believes - very strongly - in what is being done to our art - which makes it less artistic and less palatable to our fans. He's a purist in a time when too many compromise because, well, that's what we need to do to "stay off the radar..."


His disdain for the status quo, and his willingness to do things his way are why he's breathed the rarified air at one of the most storied stations in radio history.


His love for our game is why he's going to make history doing mornings...


... because he's playing the game by his own rules.


"Never settle," he said just this evening on a radio group we're members of on Facebook.


Saddle up, JJ. I'm looking forward to watching you blaze this next trail... and I have no doubt it will be just as amazing and inspiring as you've been to so many.