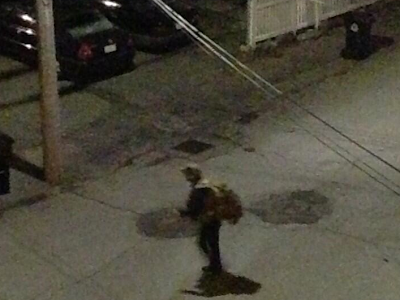 Posted by Unknown at 1:58 AM No comments:

BOSTON BOMBING: Dude who had his legs blown off... helped FBI ID the bombers...


This should be the lead story on news right now. Not the iPhone photo...

Showing the dude in the white hat... one of the suspects... above. The photog tells CNN that the shot was taken on an iPhone...


Some guy went missing at BROWN... which is in PROVIDENCE... a few days ago... some are asking if this guy looks like the guy in the white hat... It's not. And hopefully he's found soon...


Here is REDDIT's thread should you wish to check it out. After a long day of shock, pain, suffering, and mourning yesterday, in the early morning hours of April 16th we are receiving some word on several of the victims.

First off, an update on the man IN THIS VIRAL PHOTOGRAPH:
STABLE CONDITION! 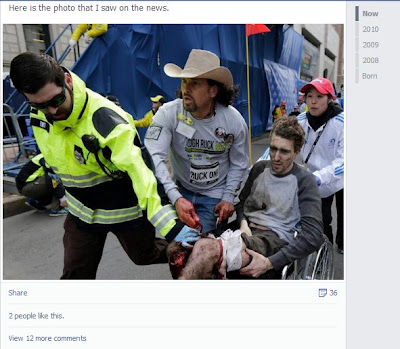 The full image is incredibly graphic, and shows that the man in this photo's feet and most of his legs have been entirely blown off. Apparently his father had to find out how his son was by spotting this photo, and out heart goes out to him.

So this man, whom we now know as "Jeff Bauman Jr." and is now reported by his friend within THIS UPDATE THREAD that Bauman Jr. is now listed as " in stable condition."
For many, regardless of the tragic and sickening circumstance, this is positive news that "brought tears" to the eyes of many redditors reading the update on the man who their hearts broke for throughout this tragic day.

The eight year old boy who was killed in the explosion has officially been identified as "Martin Richard."

HERE, HOWEVER, we are learning that his sister and mother are in the hospital in a "grievous condition." His father was running the marathon, and his other sister is safe. Thoughts and prayers go out to their family on this terrible day.

THE FBI IS INVESTIGATING THE ATTACK TO FIND THE BOMBERS AND HOW THE BOMBS ARRIVED! IF YOU HAVE ANY PICTURES OR VIDEO, DO NOT DELETE THEM!

SEND ALL PICTURES AND VIDEO YOU TOOK FROM THE ENTIRE MARATHON EVENT TODAY TO THIS LINK!

The name of the victim has not yet been put out, but this EYE WITNESS ACCOUNT from a nurse at the scene describes the blonde haired victim who the nurse describes as "20 or 22 years old." Her abdomen was torn open, her leg twisted around. Their CPR was useless, and she was the first victim in their "makeshift morgue."

"I still don't know who she was," he said. "She had blonde hair, blue eyes, the all-American girl. She was probably a student somewhere in Boston."

Eight and twenty years old. Two very young people dead at the scene of the bombing today. May our thoughts be with their families.

ALL UPDATES, PEOPLE FINDERS, HOUR BY HOUR HERE
This Reddit Thread also offers a comprehensive list of emergency phone numbers, places to sleep if you are in Boston looking for temporary shelter, and first hand accounts of the situation.

#PrayForBoston today. And hug the people you love. 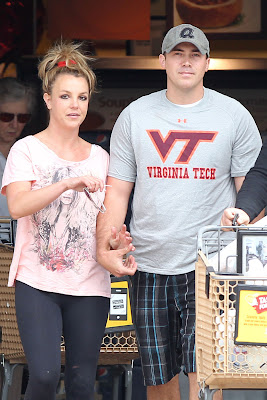 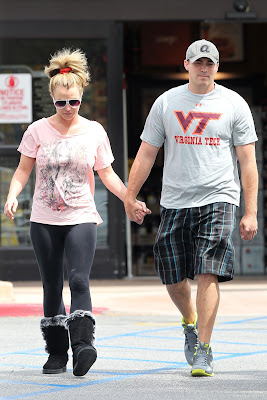 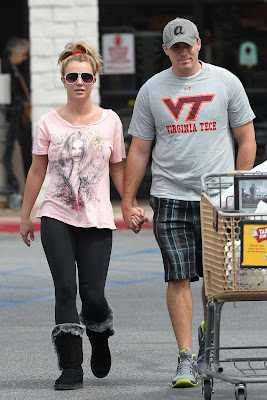 Spears and her man - David Lucado - stepped out hand and hand to get some groceries and whatnot in LA.

Brit, clearly in comfy-clothes, looks to be very happy with her younger and virile man!

Posted by Unknown at 4:46 PM No comments: