GLBT: Spa tells Gays, Transgenders and the like to GTFO!

Well this isn't going to end well for this spa, at all... 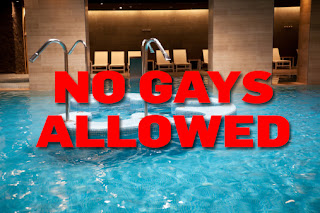 The DC GLOBAL gay community is ROYALLY PISSED THE EFF OFF at this hour after news that a Korean-style Virginia - and Rural DC - Spa - would no longer welcome members of the LGBT population to find peace and serenity at their facility!

They're called SPA WORLD. Who knew a place of peace was in all actuality a haven hiding a secret apparent hate which isn't so secret anymore.

Here's the story at the center of the firestorm.

Long story short -- a woman was asked to leave the spa because she was transgender. And, when asked, employees of SPA WORLD said they'd received some complaints and whatnot and that the spa does not serve LGBT people.

THERE IS NO WAY THIS SORT OF DISCRIMINATION IS OKAY.

This is the second time this week we've seen this sort of discrimination rear it's head. First, with the NFL when a combine athlete was asked if "he liked girls..." prompting an investigation. Now this.

At any rate, I'm sure there are those who will say "a private business has the right to conduct it's business the way it wants..." and that's a valid point, I guess...

Just make sure to remember this when your cash register stops ringing because you just pissed off THOUSANDS of people who once frequented you... and that's not just the LGBT types... but allies everywhere who think this is just ridiculous.


If you want to see more, check for 'em on YELP and whatnot and let 'em know what you think of this.