Bieber was invited to meet the Canadian Prime Minister today.... and he did so wearing overalls WITH ONE STRAP NOT EVEN ON and his normal backwards hat. Like... he showed up in casual dress SO CASUAL... that he didn't even care to do up the second strap.

PM was not a "Belieber" today. 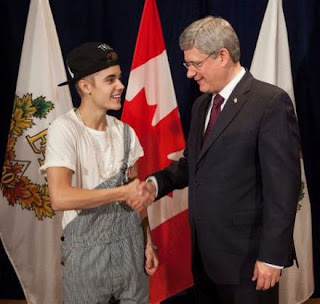 Bieber.... get your ish together.... NEVHA SAY NEVAAAHH
But really, never do this crap again.
RESPECT YOUR ELDERS SON