Remember a few years ago when THIS STORY was huge? PHILIP STREICH, eighteen year old genius, out to change the world, a PRODIGY among us. At 16, he won the $50,000 Intel Foundation Young Scientist award.

He is also a piano prodigy and had already started Graphene Solutions LLC, a factory in PA designed to revolutionize electronics. After that, he began to study nanotechnology sciences and began his studies at Harvard. He has taught himself Icelandic, Japanese and many other languages since he was a young boy and has been called "extraordinary" with "unlimited potential." 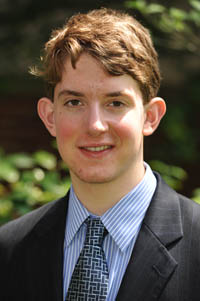 PhotoCredit to his profile on CreativityFoundation


He has said:
"I'd really almost like to combine science and politics to help fight some of these daunting problems we face: global warming and the energy crisis," he says.
"Over the years, sometimes I just can't believe it - I think how lucky I've been," Streich says. "It was the right combination of going to the university, meeting these professors who were so nice and helped me and having the opportunity to do the research. It seems like all the gears were perfectly aligned. I think I was just really, really lucky."
AND NOW, Philip Streich died in a farming accident on his family farm. THIS KID, this kid would have and could have changed the world people. Pay the respect to the prodigy who has been lost forever.
Sometimes I look at the world and think, "How can this bullshit just keep happening"
Story of his death here
Jenny Haining, American University 2013