LINDSAY LOHAN: WHAT THE HELL IS GOING ON

People, this is Jackson family drama all the hell over again.

SO THE OTHER night, Lindsay was driving home with her mother and she called her father, claiming her mother was on cocaine, her driver was kidnapping her, and on and on. HER DAD, was telling her to get the car pulled over, get out of there, yadda yadda.

So I'm thinking, "Okay Dina is messed up" but Lindsay has been calling her dad and ton lately. When she was falsely accused of getting in a car accident last week she was screaming, "call me dad." I thought it was nice that they seem to have a relationship again. 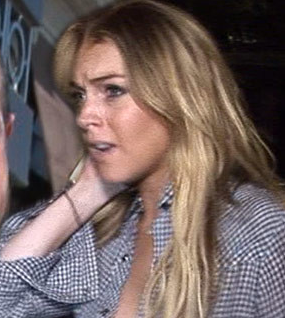 Lindsay's dad notes, "I love Lindsay and I know she loves me. Dina is using her to cover her tracks."

THE AUDIO FROM THAT PHONE CALL IS HERE AT TMZ

FREAKING NOW, Lindsay is all like, "my mom was not on cocain, my dad is dead to me." She is stating that recording and releasing the phone call proves he is not her father, he is interested in the attention, and all of that.

SO NOW I AM JUST SAD. WHO DO YOU BELIEVE IN THIS FAMILY?? Lindsay's dad now says, "No her mom is messing with her head" and I need to get her out. Do ANY of them truly care about each other? WHAT THE HELL IS GOING ON!?!??! AAAAAHJHSJHCLJDVHJDBHJDSKVHJBSKDHVBSKDHVDGSHVDH