READ THIS: The ONION mocks OBAMA'S apparent intent to DESTROY THE WORLD according to ROMNEY

THE ARTICLE IS RIGHT HERE

....and please, to convince you, read this passage from the article, DIRECT FROM OBAMA HIMSELF.... apparently 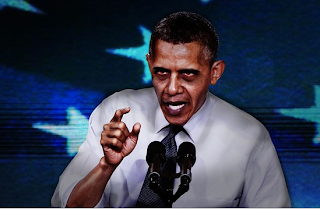 Demonic ObamaPhoto Credit goes to "The Onion" link below

“My fellow Americans and godless infidels, I command you to join me as we cast an endless pall of far-left evil across the hills and valleys of our nation!” Obama bellowed from the stage, as thousands in attendance moaned in compliance and gyrated their hips and groins in a lascivious dance. “Together, as a barbarian people forged by the wicked flames of irreligiosity and united by visions of a liberal dystopia, we will rise up as one to scorch the earth with boundless amorality.”
“The streets shall run red with the blood of forced sodomy, performed daily upon every American man, woman, and child!” the commander-in-chief shouted, froth forming around his mouth as the crowd threw hundreds of aborted fetuses onto the stage. “Die, Christians, die!”
Read the article... I nearly died laughing.
Jennifer Haining, American University 2013
Posted by J-Creations at 3:00 PM