LAST WEEK: 12 year old Jackson Ripley was watching political coverage with his mom. He was not a fan of the coverage of Romney concerning pre-existing health care and he decided to WRITE A LETTER to Mr. Romney.

"Dear Governor Romney, I’d like to say congratulations on winning the republican nomination. But, I wish you stayed in Massachusetts. You’re plan for America isn’t what we need, and would hurt us more than it would help.

You’re domestic plans (birth control, gay rights etc.) are horrible! Women should get to manage their own health, and if you wonder why you’re not appealing to many women voters, rethink your birth control and women’s’ rights plans. And people should be able to marry whom they want." 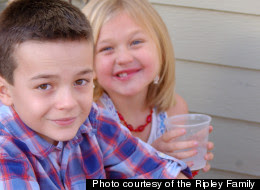 Photocredit to source above

THIS KID IS FRICKIN' AWESOME!! WHY!? Because what are children? Untainted and unbiased, THAT'S WHAT!! And this kid, he's had a life. He knows what he's talking about, and he has seen Romney's terrible health care plan in action.

Jackson has a younger sister named Kennedy who faced a tumor and terrible heart conditions since she was about 4 weeks old. So he has already, I am sure, had to face more in his young life than most. His sister was not allowed health care, always denied because of a pre-existing condition, treated like "trash" according to Jackson's mother.

Jackson HAS SOME BIG ASS WORDS from a little soul:

My inspiration for the letter was basically my frustration. It was painful (and sometimes a little funny) to see all the people that blindly (sic) supporting Mitt Romney, and I felt like I should bring that to people's attention. I already knew that his plans for America would tear us apart, and would bring more harm than good to families like mine, so I had to make a stand. What he would do was unfair, and I wanted to say something about that.

His mother says writing has always been an outlet for the boy. And upon seeing Romney on television, he exclaimed, "EXCUSE ME MOM, I NEED TO GO WRITE A STRONGLY WORDED LETTER" AND LEFT THE ROOM.

You want to see the America we are trying to create? Look at this kid. Obama needs to win his presidency because Romney cannot. Boys like this are who the Nation should listen to. The issue is simple, simpler than we can imagine, and this kid has it right.... Simply incredible.