The guy, his name is Brett Cohen. He and a few friends pretended to be a celebrity, paparazzi, and a few agents who followed him around Times Square. He wanted to see how many people would blindly beleive he is a celebrity and put him on a pedestal. 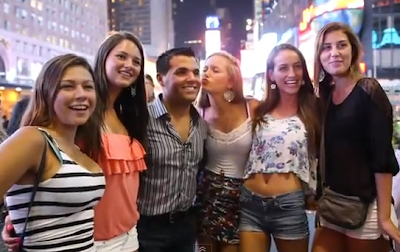 Photo screenshot from video below

People start coming up to him asking for photos, claim to love his acting, his singing career. My FAVORITE is the stupid-ass girls in the middle who claim to love him, say they are huge fans and that having met him is the best moment of their lives.


This guy is NO ONE and by the end of the night all Times Square is glorifying him and following him around like a mob. Check it out, literally one of the best things I have ever seen.

People can be so GOD DAMN stupid and obsessed with glorifying any type of apparent celebrity...and people like Brett Cohen are the geniuses who call them out.

Content provided by Jenny Haining, American University 2013
Posted by J-Creations at 2:19 AM