Lance Armstrong is STRIPPED OF ALL TITLES AND OLYMPIC MEDALS!

In an act of absolute bullshit Lance Armstrong has been STRIPPED of all of his seven Tour de France titles and his OLYMPIC BRONZE because he says he is tired of fighting the dope charges. 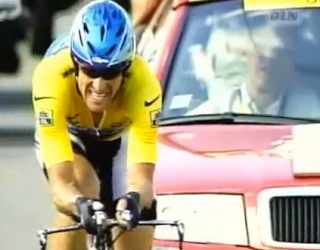 So because jealous, power hungry people continued to press heresay charges, the man has lost everything. We know who he is world, and let it be known. Call to action, write who you can, and don't let it be true.

Armstrong says the charges have taken too heavy a toll on his family and his cancer foundation, and he is done with the "one-sided.... unconstitutional witch hunt."

“It’s a sad day for all of us who love sport and our athletic heroes,” Travis Tygart, chief executive of the United States Anti-Doping Agency, said. “It’s yet another heartbreaking example of how the win-at-all-costs culture, if left unchecked, will overtake fair, safe and honest competition.”

It is possible the International Cyclying Union will appeal his suspension from the group, but thus far, nothing can be done about the loss of titles.