Alright I have never been a Kristen Stewart fan. She can be weird, off-putting awkward, not the best actress, yadda yadda. I saw this story and I saw that she was kicked out of the "Snow White" series and I was like "lolzzzz that sucks."

THEN I see that Rupert Sands, the guy who is MARRIED WITH KIDS AND SLEPT WITH HIS YOUNGER ACTRESS, will still most likely be allowed to direct the films starring only the Huntsman involved with other princesses. 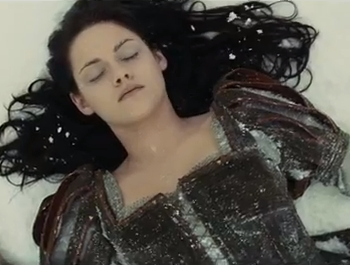 THEN I am thinking, "Okay, celebs cheat all the time. Sad as shit, but true." Also, I liked the end of Snow White. SPOILERS CHILDREN!! The Huntsman chooses her and their dynamic in a sequel would have been great.

So now I am just pissed. The girl made a BAD mistake, but don't take everything away from her and treat her like her sitch was so much worse than anyone else's! It's upsetting and unfair and if ANYTHING why is the womanizer/bastard/cheater allowed to continue on doing his job?

Alright.... are we seeing the injustice? Yes? No?