Tonight, here are some words which should really resonate:

"A team is defined as a unit. There is no team strength or weakness without 11 pulling together. Our strength is as a team and our weakness is as a team."

Herman Boone said this. If you don't know, he was the coach played by Denzel Washington in the movie "Remember The Titans."


Here's to your team. Here's to being the best teammates we can be.

This is not a post about today's 'events' in our industry...

This is not a motivational piece.

This isn't a beautiful rhetorical flourish designed to make you feel okay about life and things which may have happened to you, and it's not a piece designed to invoke optimism.

It's not a piece designed to say, "hey, shit happens and this happened for a reason."

It's a piece about life.

If you're working, do you live to work? Or, are you working to live?

If you recently found yourself fired, RIF'fed, eliminated, blown out, downsized, laid off,  "involuntarily making a life change" when it comes to the job, are you using this opportunity to evaluate the life you've been living, now that in some ways you've got your life back?

It's not. It's in yours. It - your life - has always been in your hands. The control you choose to exercise over it... now, that's a different story, and that's what this post is really all about.

No matter what happens, take hold of your life. In doing so, you'll design your destiny. Refuse to be defined by "things" and don't let, as my boss would say, "anyone put you in a box..."

Take back your life. Do it now. Working, not working, you've got the time. Choose to get it done.

Thanks for reading. You're in my thoughts and prayers.

So this is going live at Midnight-ish. Who cares. It's 9p on the West Coast, and we're global, right?

One of the great things that comes with experience is that you get to see a few things.

And after a while, you get to see a few things which get done different ways.

But funny, the more things seem different, the more you realize they're actually the same.

Some call sweepers imagers and positioners. Others call 'em drops and stabs. Still others prefer jingles or breakers.

They're all the same.

The category names may be different,  but the end result is the same. And almost remarkably - but maybe not so much - the most successful ways of doing things always seem to be the same. As if they share the same DNA. The language may change, the methods might be slightly different, but in the end, it's all the same.


PS: I was kinda inspired to start blogging here a bit more on certain 'things' by a couple of people. I guess it did just kinda stop, didn't it. Ken Lucek.


And Joe Riccitelli has nothing to do with this post.

Email ThisBlogThis!Share to TwitterShare to FacebookShare to Pinterest
Labels: chr radio, crazy thoughts, how to be the best in radio, radio, random, things, thoughts, toby knapp

I've been thinking a lot this week about this whole strategy thing.

Or, as former President Bush would have called it, "Strategery."

The thing about strategy is that you have to have one.

When you have one, the things which make you say "What the F****" just somehow happen to make sense.

But it all starts with strategy. What's yours? 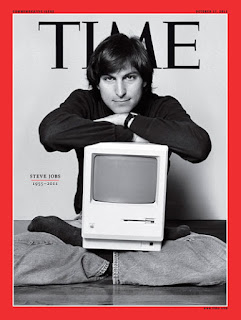 Steve Jobs is on the cover and it's a fascinating magazine - with some pretty amazing coverage of the Apple icon.

I know that some say that magazines and the "print media" are dead, but, this was some powerful content, and to me, that's what it's all about, regardless of where it comes from.

You should pick it up if you're a revolutionary, considered a crazy individual, or someone who believes they really can change the world interested in a great read about a remarkable person.

Kruz, this post is for you. It's based on our quick conversation on your balcony the other night.


I've been pretty quiet when it comes to my feelings about the passing of Steve Jobs. Mainly because I've been introspective about it, letting the lessons I've learned from living my life and pursuing my career in a Jobsian sort of way stew for a minute while thinking about how he lived, how he innovated, and about how he made a "ding in the universe..."


So lets bring that to an end.... that silence.


The main reason I've been drawn to Steve Jobs for as long as I am starts in elementary school, when being introduced to an Apple II computer fascinated me. When the ease of use of a Macintosh and Aldus Pagemaker at the time was so fascinating to me - even in High School when it seemed that nothing else captivated me or my attention. I cut classes, skipped lunch and more to use it. In fact, I remember a library aide being worried about my use of the Mac in high school because, well, "that can be an addiction, you know..."


It was rekindled when I met Eric Chase and specifically Nick Daley who reminded me of what was imprinted in my DNA... and in that rekindled fire, I realized why I was the way I was. Why I'm the way I am:


Crazy. Misunderstood. Passionate. In love with the liberal arts and design more than the science. In love with things that just effing worked and were magical as opposed to those things which worked but were just clunky and considered the so-called 'best...' It made me realize why I was at times considered above average yet at the same time somehow perceived as less than adequate.


I also realized that I wasn't the only one thoroughly hellbent on changing the world.


I'm the first to admit that I'm the beneficiary of some pretty amazing skills and talents. What comes easy for me, doesn't come so easy for others. Conversely, what comes easy for others, takes some work when it comes to me.  All in all, I've found what I love - in a field which plays to my strengths and talents and passion. When Nick reminded me of the "Crazy Ones" commercial which launched the Macintosh, and specifically, the words used to describe the people who were - and are the "crazy" ones, well, it unleashed something inside me. It changed the way I wanted to lead people. It changed the way I wanted to be led. It changed the idea of what we were in radio to do.  It changed my idea of what I was in radio to do.


It reminded me that I was at a station which existed to change the world... to be so much more than just some passing noise on a dial in a world full of noise which was increasingly present on air and online.


And it let me know that I wasn't alone. I was a person with certain talents and skills that not that many other people were blessed with, and with that came a degree of responsibility... to myself, my coworkers and to my worldview.


And so, I adjusted my internal compass and dedicated myself to the embrace of the crazy. I accepted myself and my failings and instead focused on my strengths and the strengths of others around me. I let it alter - fundamentally - the way I would lead - and way I wanted to be led by people. And it unleashed in me - and in my career - some of the most creative and personally amazing - times of my career up until this point.


See, I think that in all things, we've each, if we examine ourselves on some intimate level, felt inadequate. We've felt rejected. We've been laughed at for dreams. We've had our ideas scoffed at or dismissed by those who don't see the world through our prism of creativity - not because they can't - but because they're not fundamentally "wired" to do so.


In Steve, we found someone like us. Who believed less in the science and more in the art - and in this case, the Liberal Arts. He knew he needed the art and science to facilitate things - so he surrounded himself with the best, who could free him up to focus the vision while they created - scientifically at times, but mostly artistically - the very things which would bring amazing change to a world starving for it.


Scientists created the glass of ice water for those in hell. Jobs delivered it. Simply in an easy to understand and use glass. And, damn, did it quench the world's thirst.


He was an unlikely champion.  Given up at birth. Adopted. A college dropout. Fired by the very company he founded... and ultimately returned to save. But through it all, his passion - his drive - his fire - persevered. He changed the world through the simplicity of design, through the complexity of his person, and through the raw fire of his drive and passion.


In a time when leaders of many a major enterprise talk a good game, filled with the rhetoric found in the the latest and greatest book on leadership, Steve Jobs is one of the very few - in fact, one of a handful - who actually f****ing did it. He embraced misfits. He sought out failures. He brought in the ones the world cast out, who were called unmanageable, who were deemed to risky to gamble on. He brought in the risky, and brought out the best. He created companies which destroyed the status quo which - as is in the case of Pixar and NeXt, were purchased to save Disney... and the company he founded.


You want to innovate? Embrace the crazy. You want to change the world? Stop preaching about ideation and innovation and inclusion and such, and embrace the chaotic, yet infinitely powerful spark found in the human equation. At the risk of sounding like some current leader-types, to lead like Steve, AFDI. Stop talking about it, and ACTUALLY F****ING institute a culture which makes it possible to DO IT. Do it and watch the magic unleash in a way which will make the world take notice, will make poets put pen to paper... and will make hearts sing.


Steve did. And the world is forever -- FOREVER -- better for it.


When I got my job at FLZ, someone said once, "I don't understand how people like Toby Knapp keep getting these awesome jobs at stations like this..."


Study the life and career of Steve Jobs and you'll figure it out.