Sometimes, I wish I could turn my brain off.
I'm on "vacation" which is actually Spring Break, spending the week with Kyla, while she's here. We're doing a bunch of stuff, from learning how to ride a two wheeler, to swimming at the indoor municipal pool which is open - since, of course, other pools aren't open til later, but that's for a different blog post.

One of the things that is a blessing is that my mind is always churning. Some ideas suck, others don't suck, bit it's always working, and sometimes, that makes it restless to live this life.

Sometimes I wish I could turn it off...

... but then I remember that I am who I am because it's always on.

Here's a toast to the noises, the voices, and the ideas in your head that just seem to find a way to keep on keeping on.

Embrace 'em.
Posted by Unknown at 9:45 PM No comments:

... put this into place on the female brand blogs... 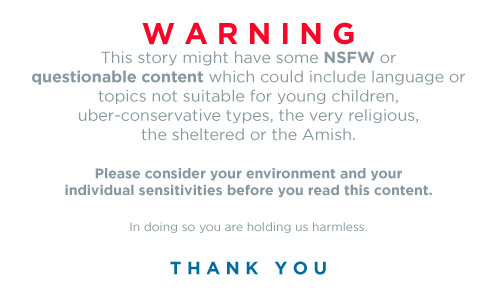 Got a great lesson from the boss this week on management, and it's especially potent for people who are in programming, and who are also talent.

When you ask someone to do something, there should be no question. So don't ask them in a way where you leave it open for discussion.

For example, don't ask "hey could you please do such and such for me?"

Instead, say "need you to do such and such."

Don't ask the question when there's no question about it. And, if you get pushback for whatever reason, don't be afraid to remind them that it's not a request, it's an order from a member of the management team.

Sometimes, in trying to "be liked" it's easy to get soft.

Was a good lesson. Looking forward to putting it into practice.
Posted by Unknown at 11:32 AM 2 comments:

Email ThisBlogThis!Share to TwitterShare to FacebookShare to Pinterest
Labels: be a better leader in radio, be a better radio personality, management lessons

Baby wants to be born

Baby wants to be born! Great video!
Posted by Unknown at 9:12 AM No comments:

Talk to the fish.

Back in Columbia, when I wanted to find peace, I'd talk to the fish.

We traded for saltwater aquariums and some FINDING NEMO style fish in our office. Apparently it made the place more professional. The GM had some in his office. The Lobby had some for visitors. The OM had some. We ran some spots, they came and fed 'em, changed the water, etc.

So when things got tough at times, or lonely, I went to the lobby and talked to the fish about ideas, imaging, web stuff, content, decisions I had to make, whatever.

I think they listened. And in that still small voice, I found my way.

Talk to the fish. They listen. You learn.
Posted by Unknown at 12:20 AM No comments:

Me thinks the Republican Party of Tea aka Lipton Party won't be too happy about this one.
Posted by Unknown at 12:19 PM No comments:

Kruz... in Texas and the one in Washington...

Poke the box. Make things happen which are new, and have never been done before. And don't be afraid to make your own content happen... anyone can regurgitate someone else's stuff.

Email ThisBlogThis!Share to TwitterShare to FacebookShare to Pinterest
Labels: a deeper toby knapp than you've seen, all access music group, be a better radio personality, chr radio, motivation, take that all access action; aint no fmqb on me, the list

An open letter to the President and Members of Congress...

And people living with an economy already on shaky footing - will be cast carelessly into the abyss of uncertain.
The stress level of ordinary Americans is through the roof right now, and people are scared and nervous. People are anxious. They want answers and this stuff is just scaring folks.
Why?
Because you are pandering, political and playing chicken with people's lives.
Frankly, let me tell you on behalf of the American people what they're thinking.
STFU and get this fixed.

GOP - you guys broke the balanced budget. Your administrations lied to us and went to an unjust and unnecessary war, spent trillions and spent us into oblivion over Iraq and whatnot. If we're being honest, you are the ones who blew it. Your party jacked this economy up so badly it's taken us years just to get back to this point. And we're living with the long term pain of your bailouts of Wall Street and Banks who screwed people and we're living with the hangover of your unbridled military-related spending. Shut up and get things fixed. And cut the amnesia act. It's just not becoming.

Dems - Don't fight stupid ideological fights. Get this done. Hold the line on what you were sent there to do and get it done.
POTUS - show some balls. Get in there and mix it up with these fools. Enough is enough. It's not time to be cerebral and wishy washy. Get in there, take a stand and challenge these fools to a fight on behalf of the American people. Use that bully pulpit and rhetorically kick they're ass. We need a leader, and a hero. You were elected to be both. Get in the mothereffing ring.
Threatening a shutdown of the Government is just weak. We're better than this. Get to work.
And stop listening to the lobbyists and special interests who don't give a flying eff about the American people. They helped cause these problems, too. Be better than this.

Toby
Posted by Unknown at 11:31 PM No comments:

Email ThisBlogThis!Share to TwitterShare to FacebookShare to Pinterest
Labels: an open letter to the president and congress, budget, congress, government shutdown, president obama