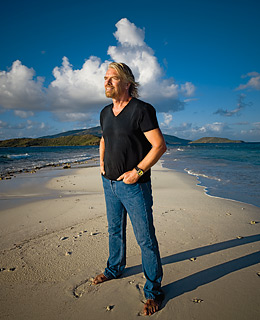 He shouldn't be. He had everything going against him.
He's dyslexic.

He was a high school drop out.

But, his grandmother, at 100, said to him to remember that you "only get one go at life, so make the most of it."

$3 billion dollars later, he's making the most of it.

It's amazing how people can come from less than nothing to change the world. Yet, it's equally amazing that peoople can have it all and bitch about why the world is the way it is.
Branson didn't really have time to bitch, as the story is told. Sure, some ventures weren't successful. But some other ones, like his airlines, his space endeavours, his microfinance endeavours and more, have been massive successes.

And his Virgin Freefest doesn't blow, either.

If you want to change the world, get busy. What's stopping you?
Posted by Toby Knapp at 12:01 AM