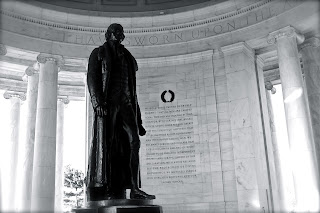 ... when it comes to reality in this town, C-Span has the whole thing on lock.
Everything else is, well,  a show. Sorta like walking down the street in Georgetown on a Friday night.
Or like walking into the W near the White House when some "event" for the "society" is being held on it's rooftop.

It's exciting that once again, DC has the chance to show the nation that this is not just a city full of egos-gone-wild-fame-chasing-self-indulgent-wanna-bees.
Will it happen? That remains to be seen. But, then again, so does pop culture perception of reality - and it's portrayal by producers - in DC.
No one gets to see it.
Reality in DC - and the reality of life in this town - well, it's just not good television.
Consider...
Right now, a mother of three has come home from her second shift job - her second job of the day, and she'll have about two hours of down time before she has to go to her third job, working all night somewhere. She works three gigs just to make sure her kids have what they need to survive in this world. She's sneaking in naps between gigs, making sure the kids are fed, dressed, that they get off to school, come home, and tend to their studies so they might - just possibly - be able to escape to a better life one day.
It's a story which is happening in the Anacostia District, and it's a story which is happening in PG county, Gaithersburg, Potomac, Bethesda and even in Tysons' Corner, McLean and Leesburg, Virginia.
It's a story which never gets told.
Why?
It's not great television. It's not the 'reality' a control group or a focus group wants to see.
But, it is what's 'seen', rather than 'scene,' when it comes to reality in DC.
Let's hope that this new Rob Lowe reality show can do what it is which people like Angie Goff have been able to do by virtue of her post at WUSA-TV.
She's been able too, as a reporter, show the heartbeat of the people who make DC what is is. Who show the growth through angst, the triumph in spite of trouble and the healing that comes through heartache.
As a broadcaster, Goff knows who it is who makes 'her' who 'she' is.  It's not just some 'thing' for her - she is genuine. She cares. Her ego, as Colin Powell would say, "isn't so close to her position that if her position goes, her ego goes with it..."
As broadcasters, we should all follow her example. And, she doesn't let the pursuit of fame define who she is. And, if she can do it, then she might just single handedly add some real credence to Lowe's new "reality show..."
If she can't, well, then like Neil Postman once wrote, we may be "amusing ourselves to death..."
DC's greatness isn't found on Capitol Hill. It's not found in the so-called high society of the pseudo-elites who congregate near what they perceive to be 'power' or 'status' or 'prestige'.
No, rather, the greatness of this city is found in the reality each of us live every day. Here's to that story. May it continue to inspire us all as we dream our American dream.
Posted by Unknown at 12:01 AM

Email ThisBlogThis!Share to TwitterShare to FacebookShare to Pinterest
Labels: dc on tv, on reality in dc, reality television