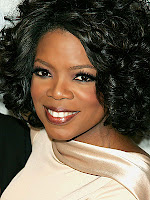 If the previews are to be believed, it's a network laser focused on women 18 years of age until, well, dead.

It oozes positivity, seeps inspiration, and it's dripping with glass ceiling smashing estrogen. It's like a 24-hour-a-day nice-a-thon. And, unlike some of the other reality shows which are on television, in typical Oprah fashion, the shows are real, targeting real people, with a dose of celebrity which only Oprah can bring to, well, anything.

I don't think Michelle Obama has signed on for a show yet, but watch, that's probably in the works.
She generally understands women better than anyone else on the planet, which means that watching OWN might, well, help you understand women and how they think just a bit better.

PS -  if you're worried that there's too much estrogen on OWN for you, or that you might need to check in your man card when you watch, don't worry... one of her shows is a Master Class with Jay Z.