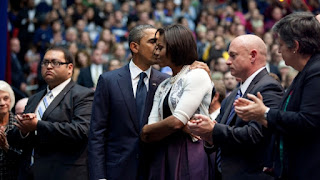 Tonight, in an impassioned speech to the American soul, President Barack Obama, deviating from prepared remarks, told a global audience some remarkable news in the aftermath of the tragic shootings in Tucson, Arizona.

"Gabby opened her eyes," he said.

Rising above the political fray - and the finger pointing from the left and right of the political spectrum - Obama turned the emotion of a nation from that of one poisoned by vitriol to that one of introspection, with some words about a woman, in her early 40's, who is clinging to a life which a deranged gunman wanted to rob her of just days before.

Congresswoman Gabby Giffords opened her eyes this evening after days of fighting back against death, while clinging to a life which has many more days ahead.

May we all have the courage to do the same.

PS: Imagine for a moment being a father of a daughter - a young daughter - having to eulogize the loss of that daughter. If there was ever to be a profile in courage... if there was to be a snapshot of an American President... the world got it tonight... as a father of a 9 year old paused to reflect on the life of a girl - tragically robbed of her life - who might as well have been his daughter. Or my daughter.

Let's honor her memory by building a better America.

And let's do it together.

Thanks for reading.
Posted by Unknown at 1:01 AM