Cory Booker: He's got next. 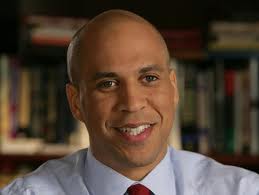 Keep an eye on this Cory Booker.

He's the future. Something about him is just - well - magical.

He elicits the same feelings from some in the punditry that a young Senator from Chicago once did when he spoke at a political convention back in 2004.

He's the mayor of Newark, New Jersey. He played football at Stanford.  He was just on Rachel Maddow's show on MSNBC talking about gun control and such in the wake of the Arizona shootings and it was riveting to hear him speak.

His story is amazing.  Just amazing.

One quick story about the Mayor says that he could be living probably in an amazing place in Newark, but he doesn't. It's told that he - by choice - is living in public housing.

As in the projects.

Why? Because it's in that public housing that he can connect with the real needs the people in his city face.

He's working to make Newark the city it should be. And, when he's done, we'd be lucky to have him living in some public housing downtown here in DC.

You know. The housing at 1600 Pennsylvania Avenue.

All in due time. He's got a city to fix first. And, judging from his tweets, some snow to shovel, too.
Posted by Unknown at 12:48 AM