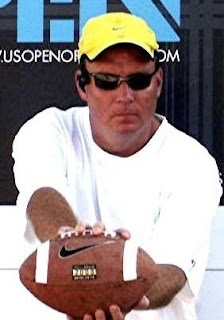 American radio presenter Toby Knapp chatted with his betting shaman, Football Jesus, about Week Four picks for his American Football pool. American football, as you know, is played with an oblong brown ball made of the skin of a pig, as opposed to the more traditional football, played with a round ball which is kicked or hit with the head.
However, this week, Knapp inquired about potential corruption in the football pool, and while he stopped short of blatent allegations, the portly presenter asked enough questions to reveal that he believes something is amiss in the league. Or, he's stirring the pot.
"I'm not saying that Junior is being shady, I'm just asking questions," Knapp said when asked about potential allegations of wrongdoing. "Junior" is a reference to pool supervisor and music industry insider George Cappelini, Junior, son of the legendary music industry promoter George Cappelini, Senior. "I've known and loved Junior for a long time, and if he were doing some improper things, well, this would be the first I'm hearing of it," Knapp added.

Football Jesus explained that he'd seen instances of line tampering in pick 'em pool situations before, and that it was something which did indeed happen from time to time. Then, he gave Knapp his wisdom for his pool picks for this week.

Knapp has trusted the advice of the Football Jesus now for the last two seasons. Prior to that, he performed abysmally in the Football Pool, bringing rise to questions as to how he might perform in bed.
"I will not respond to these questions," Knapp retorted when quizzed on his bedroom prowress. "This has nothing to do with the Redskins and Eagles, or the Jets, but speaking of the Jets, they're on fire, which means either Joe Daddio is getting some, or, he's just really happy."

Daddio is another music industry executive, and longtime Knapp colleague.
"I don't think we can talk about Joe in the bedroom, because he's got a kid now, and as such we know his junk works," Knapp said. "I can't wait for the new Pink to drop on Tuesday."
How, Pink, Daddio's junk or his bedroom performance relate to the podcast is unknown. Neither Daddio nor Pink could not be reached for comment.

Hear the podcast here!
Posted by Unknown at 3:31 PM