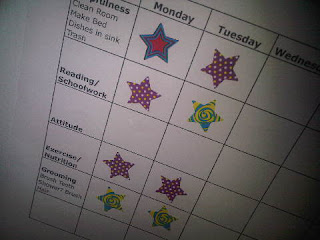 Sometimes, I think that we try to show in our new, online, 'best foot forward' on demand world, this fabricated perception of reality when it comes to parenting.
In reality, it's not a bed of roses.

Beneath the veneer we - specifically we, in the media or who as people who try to live our lives on the web, live imperfect lives. I don't care what you read about on blogs, or on Facebook, or on Twitter, trust me, as a parent, it's not perfect.
At all.

Today, when I got to Mrs. Sharon's house to pick up Kyla, I was greeted with some interesting news. I won't go into it too deeply, but I will say this:

Kyla was being bratty today at camp. She was being bratty today with Mrs. Sharon. She's been bratty at home in some areas, and lippy, and today, her camp teachers and Mrs. Sharon needed to tell me about it.
They did.
I heard how Kyla had been giving sass and lip and attitude to the adults who are charged with her care while I run my mouth for a living. She was outright stubborn on some things, and in  others, she was out and out disrespectful.


So, I called Dana, who was sleeping, and couldn't get with me on a call to deal with discipline for Kyla. Since we couldn't be together to read Kyla the riot act, I went at it alone.
I explained how she can not do what she was doing. How she has no right or authority to question the adults charged with her well being when I'm away. We talked about how much she has because she does good, and how she should lose things because she's misbehaving.
We talked about why she felt she needed to act out and what we could do to bring this to an end.
She got home and went to work to 'earn back' her attitude star. She got herself bathed, and into comfy clothes for bed. She even put her hair into a ponytail. Then, she went to bed with her new Hello Kitty pen and notepad and began writing notes to the people she had been a brat too...
... to apologize.
She has a great heart. As I kissed her forehead tonight before sleep ushered her into the land of dreams, I told her I was proud of her for writing notes to Mrs. Sharon and her teachers at camp. In her own heartfelt way, she said she was sorry, and sought forgiveness... which is more than I can say for some adults who have done wrong, screwed, conned,  scammed or cheated people, have done.
At the end of all of this, I know she knows she did wrong. She has tried in her own way to reach out to make amends. And she's shown she has a tender heart, which is sensitive because of her sweet spirit.

Tomorrow, I'm sure she will continue to make things right.
Kyla has a sweet, sweet spirit. I'm pretty sure what happened today was an exception and I know it's not the norm. But what really gives me hope when it comes to her is that by first grade, most of your personalities "hard code" traits are present...
... and hers show that she's fiery, independent, outgoing, confident, yet humble enough to be able to say she's sorry while seeking forgiveness for things she's done wrong.
Anyway, as a dad, and as a parent, I can tell you that life isn't a bed of roses, no matter what you read on the web, facebook, twitter, etc. It's not pretty, it's not always choreographed and it's not always seamless. Sometimes, its downright ugly...
... but for me, it's so worth it.
She's asleep now. I will be in a few. Maybe we're just both tired. After all, 15 hour days do get, well, tiring after a while...
Goodnight!
Posted by Unknown at 9:15 PM