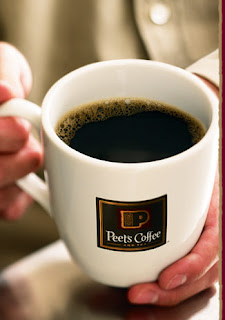 y...
I was looking for, honestly, some Starbucks whole bean coffee. The Sumatran blend to be exact, as that's what my friend who happens to be a girl named HRS enjoys. I was wearing a Nationals hat, probably a jersey and some UA pants - my typical "roll out of bed" uniform.

So into Safeway I rolled one morning in search of beans. In the aisle, this man gave me a glance and attempted to spark up conversation...

"Those Nats look pretty good this year," he said, to which I replied that I hoped the "Expos don't show up at some point..." which is my typical line when the Nats meet some sort of 'doom' during the season.

We then conversed about baseball, life, and then, coffee.

"You're here for some whole beans," the man said. "Yes," I replied as I went about searching the Starbucks beans for the Sumatran bold that I was sent to get.

"Let me tell you, have you tried Peets?" he asked?

This local retailer began to school me on this Peet's coffee. The beans and shop which inspired the creation of Starbucks. The beans which were so well done - yet nobody knew of them. The company which was so good to this man that it was "a pleasure to work for them..." on top of a commitment to providing the most fresh beans to the world within 24 hours of roasting.

I raised an eyebrow.

Then I realized this man had some passion not because of a job,  but because this job had become his passion.

He handed me some $2.00 off coupons, bringing an affordable coffee priced at about $8 bucks a pound down to $6 a pound... and then, add in the Safeway $2.00 discount, I was paying 1/2 the price of Starbucks for a coffee that had some promise but that I hadn't tasted to that point.

I came home and showed the beans to HRS, who, unbeknownst to me, had toured one of the Peet's provider plantations on one of her many trips out of the country to discover the world. I believe she went to one in Costa Rica. Anyway, she knew of Peets' instantly. And, at the same time, she knew the beans were amazing.

This before we brewed a pot of coffee in the French Press.

Eventually, we did brew the coffee. It was amazing. Peets made me a fan and then, I researched this brand.

They were the inspiration for Starbucks.

They're soley focused on coffee and teas.

Their quality is second to none.

Their roasters are in house and have been part of the success since the beginning.

They give back, and encourage and reward sustainability.

They're committed to their customers.

They're doing pretty much everything right.

And, oh yeah, they make a pretty amazing cup of coffee.

The West Coast is pretty familiar with Peets. Specifically the San Francisco area. But let me tell you, if anyone - namely Starbucks - allows Peets to grab hold of a national picture, it will be over for the chain in about 10 minutes.

Peets schools Starbucks because Peets was the influence for the beginning of Starbucks. This makes Peets Starbucks v. 1.0.

And as we all know, the beta is the best.

If you have Peets in your grocery store, get some. If you don't  - order some. It's that good.

In fact, it puts Starbucks to shame.

Peets, btw, is way past Dunkin, I might add.

Thanks for reading. Goodnight...