The Colonel would be proud...

I've been lucky enough to have some awards for writing on my wall in case this radio thing doesn't work out and hopefully maybe one day they'll help me to continue to pivot and evolve my career.

So, one of the biggest names in publishing and from the era of print journalism is this dude Col. Robert McCormick. He's from Chicago and had a command of the Chicago "way" I'm told.

That's why I think he's very proud of what I read about here. 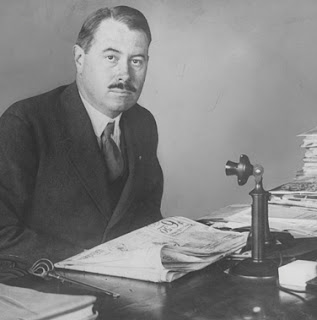 Anyway, I think the Col. would be so proud to see how his descendants are keeping his legacy of hard work and hard play alive in what was his office! The people of Tribune recently had a morale building experience involving cigars, poker and liquor in his old office! I think I'm jealous... 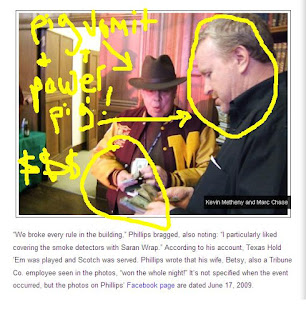 Here's Marc Chase (above right) giving poor Pig Vomit (above left),  the former PD made famous by Howard Stern for trying to rein him in at WENNNNNBEEECEEE back in the day, some money. This benefactor, Mr. Chase, seems to know that Pig Vomit must be getting rolled in some poker by some of these other cohorts, and as is his way, he's lending him thousands of dollars so that he might live on to play for another day. 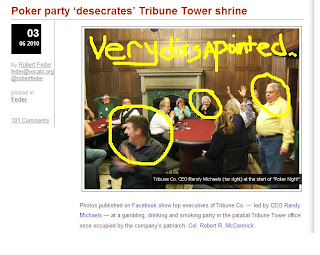 And above is a picture of people raising hands and clapping when they ask who might need some money for a cab fare home... and I'm very disappointed that only the man at the bottom left, Mr. Kapugi, has a beer in front of him that is open... I'd expect that the man on the right, circled and in the center, circled, would each have a bottle of Jack Daniel's or whatnot open and ready for morale-based celebration and other mentally-stimulating sorts of purposes visible and readily available for consumption...
Now, there are some folks who say that this morale building exercise was a 'desecration' of some sort of temple. As if this office they were building morale in is some sort of religious relic. I'd argue otherwise...
The secret of any organization - what makes it 'sacred' or 'holy' - is it's people. Past and present. And, maintaining the morale of those people is as 'religious' of an experience as I can think of for any organization.
And so, this morale revival is a good thing and I think the Colonial would be proud.
But then, again, I've been drinking. And it's 10am.