Why Obama is taking his time with Afghanistan... 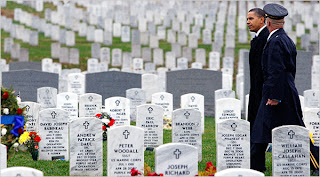 I've been hearing a bunch of stuff lately about how President Obama is, well, taking too much time with Afghanistan and a strategy there.

I want to make it clear why he is - at least in my opinion.

We went into Afghanistan for all the RIGHT reasons. We were hunting Osama. He was in Afghanistan. We knew this and we pursued him. Overthrew the government which was giving him safe harbor and then, started to hunt for the still-elusive mastermind of terror in the world.

Then we got distracted with Iraq. We marched in and took over a country we had no business being in with intelligence which was based on lies and deception and, honestly, a political need to have 'someone' to fight so that we could 'get a winner' which would extend the military-industrial complex which was now driving the economic engine in the US at the time. At least, that's how I see it.

In doing so, we tossed aside the policy which had goverened the use of US force for, well, as long as I can remember.

We tossed the Powell doctrine. We replaced it with this Bush-Cheney doctrine which convoluted the mission, clouded the objectives, alienated the world and had NO clear exit strategy.

Fast forward nine years. A new President. Iraq is somewhat stable. Somewhat. And Afghanistan, the hunting ground we went into looking for Osama, is drifting toward lawlessness and civil war. Commanders are calling for more troops. Republicans and conservative pundits are saying "send 'em all in..."

I think the General and the President are putting back into place the tenants of the Powell Doctrine. If you don't know what it is, here's a nutshell view from wikipedia:

The "Powell Doctrine" is a journalist-created term, named after General Colin Powell in the run-up to the 1990-1991 Gulf War. It is based in large part on the Weinberger Doctrine, devised by Caspar Weinberger, former Secretary of Defense and Powell's former boss.


The Powell Doctrine states that a list of questions all have to be answered affirmatively before military action is taken by the United States:

Do we have a clear attainable objective?

Have the risks and costs been fully and frankly analyzed?

Have all other non-violent policy means been fully exhausted?

Is there a plausible exit strategy to avoid endless entanglement?

Have the consequences of our action been fully considered?

Is the action supported by the American people?

Do we have genuine broad international support?[1]

As Powell said in an April 1, 2009 interview on The Rachel Maddow Show, the Doctrine denotes the exhausting of all "political, economic, and diplomatic means," which, only if those means prove to be futile, should a nation should resort to military force.

Powell has expanded upon the Doctrine, asserting that when a nation is engaging in war, every resource and tool should be used to achieve decisive force against the enemy, minimizing US casualties and ending the conflict quickly by forcing the weaker force to capitulate. This is well in line with Western military strategy dating at least from Carl von Clausewitz's On War.

Reading this, you see it's clear that Bush the Younger tossed what it is that made Bush the Elder a hero. It's pretty obvious, actually.

So what does all this mean?

I think that we're about to see the results of a well thought out decision by our President. One which meets each of these tenants. One which as a clear exit strategy. One where we take the gloves off, use OVERWHELMING firepower with a CLEAR political objective. And when we turn this noise up... it's gonna be GAME ON...

I guess I'm saying to be patient for just a bit longer. Especially if you're like me and you want to know why the President is just sitting back and taking it in the rear from the conservatives and pundits in DC.

And when this happens, it will pretty much be the STFU we've all been waiting for.

You know, I can't imagine what the President must be feeling. We live our lives. We make decisions about where to get gas, what bills to pay, what to wear out to Georgetown on a Friday night.
The President, meanwhile, is making decisions on whether or not to send thousands of people into harms way. Some of whom may die to fight for and defend our way of life. You know, our cars, our Whole Foods, our Football and our designer jeans. And our Bobbi Brown foundation, or MAC as the case may be.

Wow I feel preachy and academic today. Maybe I should stick to gossip and music and dirt, but, this is the stuff in my head. Thanks for reading.
Posted by Unknown at 12:29 PM