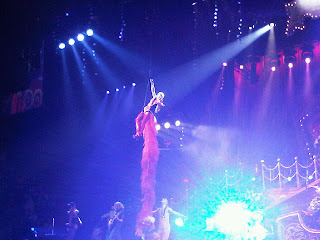 See more pics from the show that i snapped here...

You can add a new name to the list of artists who - to me - embody what it means to be artists and activists. You know, those who write from the heart and who scream their hearts out on stage. The ones who go out and give it their all for their art and who share with those who will listen what fears they might have, what insecurities they face, the thoughts they're having and most of all they're the ones who make us feel. Ones who are real... and who can do it with just a guitar in an empty room... or in a studio packed with the latest in technology...

So, Alecia Moore, from outside Philly, who we all know as Pink, has joined the list in my life of artists who - well - make a difference.

Tonight I watched as Cirque du Soliel blended with a soundtrack provided by an amazing set of pipes backed by a band of musicians who complimented the entire experience in a way that gave me an adrenaline rush which lasted the duration of her set.

And I never got bored. She kept me the entire time. Her band had my jaw on the ground and her talent - which re-arranged some of her former R&B type sounding songs to the way she broke it down on a song that was so obviously about her trials with her husband - connected.

All the while she proved she's got something to say, and she's not disposable. At all.

Best thing is, she told me it would be this way.


Listen to this from when she announced the tour.


She's probably my hero now. Yeah, when she brought out the moonshine on stage and called out President Bush - AGAIN - with Mister President... she became my hero.


Here's another great podcast... check it out...


... and by the way, I don't think U and Ur hand was about Tommy Lee... I still don't feel the organized religion... and the bottle of Jaegar is cold for next time we catch up!


Pink, thank you for an amazing night of art. What a moment.
Posted by Unknown at 12:44 AM