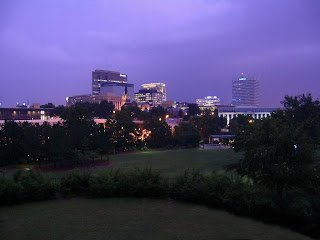 I can still remember the whispers from some when I first arrived from Tampa...

"That station was so huge why would he leave..."

"Didn't you just think that you could have been 'talent' and everything would have been awesome... I heard some of the breaks you did while tracking in from Tampa and that s*** was hilarious... maybe you shouldn't be a PD... "

Tonight, a friend and brother reminded me about what he called "my Columbia..." with some life and career stuff he's got coming up...

It made me think. And those thoughts I want to share tonight...

Columbia, South Carolina was a pretty amazing place. A place I never thought I'd be in my career. A place I wanted to go. A place I fell in love with.

And I hope if history tells the story correctly, it will be a place where we did indeed make a difference.

The whispers were right. Why would I leave the radio mecca of Tampa? A place that was so amazing, so incredible and so... perfect... to step into an unknown where I'd never been into a situation I've always wondered about but never known?

Because it was what I had to do.

I could go into the professional and personal reasons for either staying or going, and I will, when I write the book. But for now, it was just what I felt I needed to do.

Because it would center me.

Because it would lead to me getting out of my shadow - and the shadow of where I was.

Because there was something I needed to do and to prove.

Because there were things I needed to learn.

And because it was the place where I needed to go to find myself.

Some of my friends have heard me say lately that market doesn't dictate happiness. That it's about what makes us happy as we work so we might live. That only you as an individual and you alone can decide what is right for your destiny.

I was supposed to leave the comfort zone and become who I am.

Just as it is for anyone who seeks -- and finds -- their Columbia.

I learned so much there.

And I almost failed there miserably.

But that's when the me I know is within me came in. All the artist in me gave way to that which is also the scientist in me - and finding that balance as a programmer - became the difference. We created a great radio station by artistic standards....

... but it was the science that made what we truly did in Columbia while I was there - professionally - so profound.

And it was me personally, the time where I learned how to let go of me. How to find a love I thought I'd lost at the time. To find in myself that I was indeed the father I always imagined I could be and the person I'd wanted to continue to become.

In Columbia, I found who I am.

You can't put a price on that.

In life. In career. In our travels on this globe, we'll each encounter a Columbia. A place where the clouded becomes clear. Where the crooked becomes straight. And where life reveals itself.

I hope that soon... you find yours. If it hasn't already found you.