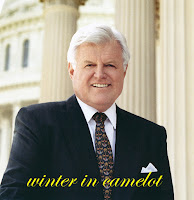 Senator Ted Kennedy, the brother of the President and Attorney General from my parents' generation - has been called home.

He was the voice of so many who were voiceless. The tireless champion of the classless... the man who believed - and made others believe that those who couldn't -- could -- has passed into the anals of History.

To Heaven has gone a man who believed that the idea of America was one which said that "unto the least of these you do unto me..."

That's why he was a champion for healthcare.
But that was the tip of a political iceberg which was an American life.

To Heaven has gone a man who - by the chance of History - became the standard of an American Ideal which generations will forever refer too as Camelot.

Tonight, a power much Higher than you and I says "well done my good and faithful servant..."