Why I care about the Backstreet Boys... 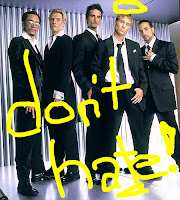 It's not really because I'm some groupie.
Sure, Nick is a friend I've been drunk with before. Sure, his ex was my neighbor for a time.
Sure, there was the time in Myrtle Beach... and sure there were the countless times in Tampa...
Sure, I slept in Tommy Chuck's guest room --- where he entertained some chick and she left the shoes under the bed which were - well - still there months afterward.
Sure, we had 'em at HOT for a LBD a year ago.
That's not it. It's a bit deeper...
... and it's not because they've had a career that has paralleled mine.
It's because they're a group of talented people who have persevered. They haven't tried to be N*SYNC. They've not tried to be Justin Timberlake. They've been true to themselves and to their music, and to me, that makes them real artists. They've had issues. They've had ups and downs, solo careers and softer cd's in the eyes of the critics.
But they've stayed true to themselves.
Can we say the same thing? Can other artists say the same thing?
Never Gone was probably one of the best CD's from beginning to end I've ever heard. And I heard it a ton driving back and forth from Columbia, SC to Raleigh, NC to see the poster girl I was dating at the time.
Unbreakable was an awesome CD with some songs that - well - connected with me at a time when I was with someone who made me 'helpless' when she smiled.
I remember seeing Nick for the first time in - well - a year or so in Myrtle on the Never Gone club tour and he walked up to me like we were still in Tampa and was like "what are the BUCS gonna do this year..."
A real person. Despite what the tabloids might have wanted us to believe.
I won't judge him. What gives me the right?
It was like the time when Willa and I... and NICK... sat down in Vegas and had a great time on the air live from the Radio Music Awards... right before he and I had lunch at some store in the then Paris Hotel (now Planet Hollywood) Galleria.
They get it.
They stay true to themselves and their music. That's why I stay true to them. Loyalty runs deep in our family -- through highs and lows -- and through it all, you stay loyal....
And so, that's why I support the Backstreet Boys.
They've got a new single and a new CD coming out in a few days. Give them the chance. They'll move you again. I promise...
... and If I'm wrong, I'll buy us all dinner at Sonic.
Be blessed til tomorrow...
Toby
Posted by Toby Knapp at 12:44 AM