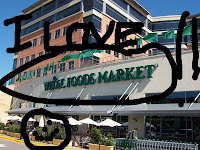 Going to Whole Foods is - for me - like being on drugs.

Really. And it probably is for you too. Admit it, you go there because it makes you feel a certain way. It's not any different than Harris Teeter, is it? It's not any better than Bloom, Publix or Safeway or Kroger. All stores have organic food. All stores have 'store brand' products. Sure, they're not called 365 everywhere but, it is what it is and - really - it's all the same, right?

Only the names are changed?

So, what is it about Whole Foods?

Are they blowing some schnitz through the air vents a la Studio 54 back in the day to make us feel good and better about being in their store?

I set to the internet to find out. Mainly because I ran in there today for a few items, picked up some more, and left 100 bucks lighter.

Typical for Whole Foods, right? And from what I gather, par for the course.

But these guys seem to elicit an almost Apple/Steve Jobs-like-cult following out of the bourgeois and the wanna be bourgeois. Check out their parking lot. You got Yugos and Land Rovers - BMW's and vintage Beetles. And OMG are they packed.

I'll tell you, I love the prepared foods there. They're generally amazing. But OMG are they overpriced. Never mind that the prepared foods I like contain the ingredients which probably do normally cost a bit, but whatever. I also like the fact that I can get the organic stuff I've been trying to eat lately. I like the abundance of wheat. I formally would say soy products but there's a report I'm trying to confirm saying that soy products cause cancer in men and women and increase estrogen levels in pregnant chicks, so I'll hold off on the Soy but you get my point.

Whole Foods has this.... something. I don't know what it is, but it's crack.

I wish I could bottle it and sell it.

They're the 16th best place to work for according to Money magazine. Google is first. That to me says a bunch about the people who make the place what it is....

... but what is it about a place that would make people hand over what they don't have - or that they can get for less elsewhere - to a place, during a recession.

They're getting crushed in the UK.

Blogger HappyKatie offers some good views, but she's obsessed... and I take it she's not going broke.

Some others on Yahoo's answers website offer some other opinions...

Maybe now that America is offically the fattest nation on the planet, it's just our way of medicating our reality - making ourselves feel like we're doing something about our underlying weight problems - by shopping "healthy." Maybe we feel like when we shop there we're doing our part to lose weight.

I did notice there's a plethora of non-healthy items at Whole Foods, I mean, just for the record.

But who cares. It's organic. And grain fed. And the salad bar kicks ass!

Ya know, I don't know what it is about 'em. I just love 'em. I'm also smart - and don't buy everything there. But when I can - and when I want something that is just a little bit closer to this side of healthy, I go there.

I guess I'm obsessed. Or infatuated. But I love some Whole Foods and I don't know what it is.

Whatever it is that makes people passionate about grocery shopping, Whole Foods has it. And people spend tons of money there because of it. At least in the states.

... and I'll probably be in there tomorrow after work.