What is a 'family' in the new world? 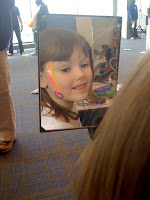 I don't know if I subscribe to the idea that you can define a family by things like blood, birth, etc, anymore in this world. And tonight, I'm more certain that what I used to think might be sort of a radical notion about the definition of a family, is right.

I think family is just as much a feeling and a love and an interaction is it is a bloodline or birthright. I'll explain...

I once borrowed from Hillary and said that with Kyla, 'it takes a village...'. If you read back in previous posts here - specifically from WAY back, like from when Kyla came back to live with me in SC, you'll see some of what I mean by that.

Flash forward three and one half years or so and I can tell you that the village is the family. And we all have a role to play - and a vested interest - in the one we collectively choose to mentor.

Maybe its that Kyla is going back to her mom for her mom's turn after the last nine months or so and that I'm a bit emotional. Maybe it's that she's starting kindergarten in Florida that has me reflecting.

No, I think maybe it's that I've seen so much emotional outpouring for Kyla in the last two weeks. Now, don't get me wrong. It's not that we're sad she's not going to be around all the time here in DC soon. Certainly I'm not looking forward to the silence... to not having to make her breakfast and lunch (or running to get breakfast at the Jewish Deli lol). I'm sad. Her friends - our friends - are sad. We'll miss her daily presence. I'll miss the pictures and notes she leaves me all over my house, office, car... you get the idea.

On one hand, we're sad, but it's more of a selfish sadness.

On the other hand, we're happy for her. We're happy that she's going to spend some amazing time with her mom and her in mom's world. We're happy that she's going to start the first chapter in her education which will carry her as she becomes a pretty amazing person. We'll cheer as she grows and we'll be there to celebrate her successes until she gets back here for the holidays or summer...

Rather, as I think of it... I think the emotion comes from the fact that there's just something pretty special about her.

She touches people in a way I've not seen too often. She does it with a smile. Or a laugh. Or a wink. Or with some strange remark about a Kudu - which is an South American rain forest animal Diego saves. She brings something out in people. She has an amazing charisma. She loves to learn and play. She loves to ham it up for a camera, on a microphone and even in front of a crowd of strangers.

She challenges things... and she - and I mean this - at five - knows how to push the edge of the envelope in anything - to find out where it used to be.

There's something pretty amazing about Kyla Marilyn. She has the 'it' factor... an 'x' factor which I wish I had, believe me.

We spent some time with some family tonight... and it was sorta emotional. And while Sunday Dinners with the Daddios will become a once a month or so occurrence rather than a weekly thing now, what is certain is that there's a pretty special emotion this five year old munchkin brings out in people. She's made people look at themselves and their lives. She's made people realize that anything is possible when you look at it with a kid's point of view.

But more than all of this... she makes people smile.

What more can you ask from family, right?