OnStar... behind the scenes at their headquarters... 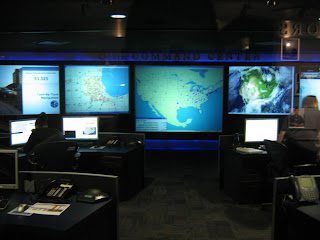 When you press the blue button in your GM vehicle - here's where your call goes.
This is OnStar's command center in Detroit. Now,  this is one of several centers around the US and Canada which take your calls when you press the OnStar button if your GM ride has it.
Here they monitor everything - fires in California, Hurricanes and potential hurricanes in the tropics and if you look close at the map you can see how many OnStar button activations - at this point thousands and thousands - have happened in a day. 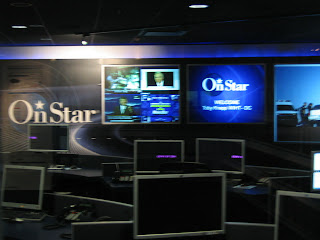 Now, going into the 'fishbowl' wasn't something that generally was allowed, and rightly so. This is where they monitor the happenings on a macro level. On a micro level, I was allowed to go into the command center's call center where I could see in real time emergency calls coming in, requests for turn by turn navigation coming in and even a call from a good Samaritan in Texas. It's amazing.
What's even more mind blowing is that if you have OnStar, and some car hits you, or if you hit some car, they can even tell the authorities how fast the other vehicle was going at impact that hit you. If your car gets stolen, they can slow the vehicle down, flashing the lights and laying on the horn making a getaway impossible. We're way past unlocking the doors now.
In fact, they can even pull up the satellite imagery on an incident and tell authorities which tree your car is near if - God forbid - you were to ever ride off road. 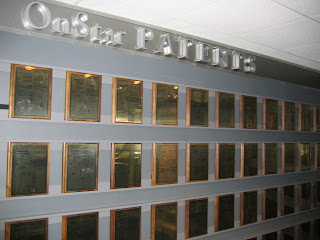 This is the 'patent' wall - showing off more than the 100 patents they've got as part of the development of what is today's OnStar.
It's impressive. No matter where you go, in your GM vehicle, in the US and in Canada - there's someone there. The center is staffed 24/7/365 and, looking at the map on the wall showing the 'button presses' or people who have pressed the button, you could see - at 9 am while I was there - the country literally waking up. You could see people calling for directions in Newark, NJ to people calling about accidents in California.
With OnStar, you don't need navigation. They can download turn-by-turn directions to you if you need 'em. If you have navigation, well, that just makes the service that more powerful.
You don't even need a cell in your car. Not when you can press the call button, tell OnStar to "DIAL" and let OnStar do the rest. 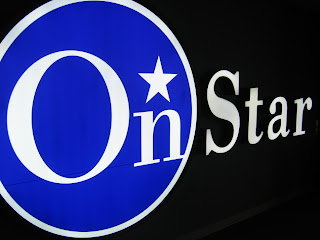 It's pretty impressive when you come up with something which does so much for people. And where they're going is equally as impressive as where they've been.
While in Detroit, they brought me into the loop on some of their future plans for OnStar and I've got to tell you that while things look amazing for this independent company which stands on its own alongside GM, as a teammate when it comes to making sure its subscribers are never alone on the nation's roads. 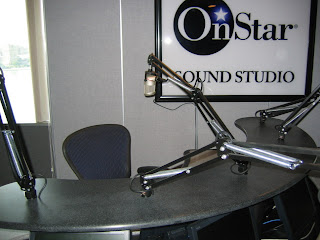 This is the OnStar sound studio which was designed with help and guidance from XM which they allow radio personalities to use. It's state of the art, packed with stuff that would make people in the nation's biggest markets envious.

At any rate, I just wanted to share some behind the scenes stuff with you so you know that when you hear me talk about OnStar on the air that they really are one of the best services I've ever seen... and one of the most powerful resources you could ever want to have on your side when you're behind the wheel.
Thank you Rosemary for your hospitality... my best to you and your family and I can't wait to see you again soon!
Posted by Toby Knapp at 10:27 PM