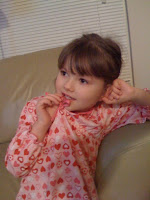 Some words - when spoken - sound like the angels in heaven singing a chorus of praise to the Most High.

Today, Kyla said something certainly less profound than the chorus of angels, but to to me it was pretty awesome to hear.

Watching some Disney movie in my room with Mitchel Musso dressed in a Chicken Suit, Kyla and I were recounting our day.

A day spent at the pool, getting sun, having a lunchtime hotdog and Whole Foods cookout, back into the pool for more sun and play, the over to this great sushi place in my neighborhood I never even knew existed! Sure, there were a few tantrums (she didn't want to walk to sushi, daddy needed too - it's called exercise), but all in all it was a great day between a daddy and a daughter. Although we did miss the DaddioDuo but that's a different story.

Anyway, while in the Pool, Cathy, our neighbor who I call the "cruise director" for the SS Camden Cruise Ship we live at, went and got a radio and put the station on so we had some ambience. Funny how music can become the perfect accent to any day. Anyway, there were other neighborhood kids in the pool as well, and Kyla, who is not shy, went right up and started to make new friends.

Time went by, I was taking in some sun while floating in Cathy's tube, when I overheard Kyla talking to the kids. The Black Eyed Peas/I Gotta Feeling was on the station and the kids were singing.

One said something about liking the song and Kyla followed up, "do you like the station?"

"sure everyone does," the kid said.

"That's my daddy... he's Toby Knapp and he works at the station and he's right over there..."

Then the usual weirdness sorta ensued. Kids who don't know how to react to people on the radio who are just really normal people who have normal abnormalities and whatever like anyone else. LOL. Some of the kids there already knew because I hosted the beginning of summer pool party for them, so they were like "we know... that's cool..."

Others started talking to Kyla about the people we've been blessed to see perform live, or meet, or whatever.

I've heard her do this before. We've had and shared many moments before...

... but today for some reason it resonated.

So tonight while we watched this Mitchel Musso Chicken Suit movie, we talked about it.

I reminded Kyla to try to keep some stuff in our life between us so it always stays special. I talked to her about the importance of not bragging about things because we are so truly blessed to do what we do and to have what we have and we should never take advantage of it - or take it for granted. I told her that I - in my life going forward from here - want to give back, and leave a legacy, and to make a difference and that we should try to use the gifts that we're given to do so...

... and I told her to always - no matter what - try not to brag about any of life's blessings. They would speak enough for themselves by themselves.

She said she understood. She's five. Somehow, I believe she did.

A few seconds - or minutes - I lose track because with Kyla time just seems to stand still - went by. Then Kyla snuggles up to my right arm, pulls it close and says, "daddy?"

"I'm proud of you. You're my very own one and only daddy and I love you Toby Daddy Knapp..."

I leaned over and kissed the top of her head. She laughed like she does.

I teared up. But I didn't cry because I'm not some weak ass crying little beotch. I was just tired and the chlorine had bothered my eyes since we were in the pool for as long as we were.

Several minutes later, I could hear her breathing get slow and deep. She was off to her magic kingdom in her dreams. But she was still holding my arm.

And I can still hear her telling those kids "that's my daddy..."

It made me think how proud I am of my dad. A scientist with two degrees. A man who - quietly - has a pretty important job he does and who does it quietly. But who also has ribbons and awards from our Government to say "thanks" and "we're proud of you" for what he's accomplished. He's always been there for me and my family. Just as his father was before him. And his dad was a pretty awesome member of the Greatest Generation. I wish Kyla had the chance to get to know her Great Papa... She will one day, I guess... Anyway...

So tonight, Dad, I'm proud of you. Thanks for quietly teaching me how to be a daddy.

And Kyla, I'm proud of you. For the little lady you're becoming.

But most of all I'm just proud to be your daddy.

Goodnight, friends. God bless. Best of luck to you as we get into a new week...