Blake Lewis has next... 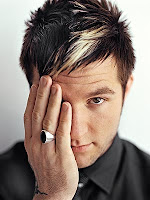 Blake Lewis has produced a musical Rembrandt.
Oh, that's a tall order?
I got to hear his new CD today. It's on Tommy Boy - and it's not out 'til October - but wow did it get me fired up. I'm a fan of electronic pop. Specifically music that is unabashedly influenced by the techno-pop sounds that came to us from the UK.
You know - Erasure. New Order. Depeche Mode
Being more modern, I'd say BT. Even nine inch nails - although Trent is mosdef a lil' bit harder than Blake's new stuff...
I'm sure I've left some blatent influences off the list but I think you get the idea. This former runner up American Idol has delivered music junkies a piece of musical crack - and his first single, called "Sad Song" is just the tip of the iceberg.
Better call your musical pusher. There's some great stuff about to be delivered.
From beginning to end, his CD is amazing. I'm betting 19 management and American Idol might have a piece of it, and if they do, they better get him on the show to perform some of this stuff, because it's nothing short of superb. Even if electro-Euro-pop isn't your thing, you can't deny that this dude is to music what Pixar is to digitally animated movies.
Blake has taken Cars, Toy Story, Up, Monsters, INC and the Incredibles and created a piece of musical art that would make the most skilled artist crap his pants.
Yeah I'm serious. It's THAT good.
Blake, well done, bro. Your new stuff is sick. I can't wait to get it again. I'm sure some fans are tired of me going blah blah blah about it, but it's amazing.
If I'm right, it will break out of the clubs in NYC and out of the radio stations in Miami, Tampa and Florida. LA will be there. And - if I'm right - the UK will probably beat us too it.
It's that good, people.
I'm not just typing this because he was here today and because I consider him a colleague...
... nor because I have a crush on our mutual friend Nina from Seattle ;).
Blake Lewis has delivered some musical nourishment to a world that's hungry for what he has to offer. It's unlike anything else in popular music right now. It's unlike anything else on pop radio, which is funny...
... since its 100 percent straight up in your face, unapologetic pop.
Blake -- how does it feel to hit a home run? Get back to DC soon. Wanna sing the National Anthem? I know someone - Tom Davis - who can make that happen at the Nats...
Good job, bro... and thanks for the great hang today...
Hear our conversation today... with autotune... here!
-t.
PS --> nina, I heart u...
Posted by Toby Knapp at 12:05 AM