bill clinton is STILL the man... 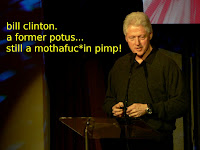 If you missed it, American Diplomacy just pulled an Adam Dunn... and hit a grand mothaeffing slam.

The press keeps talking about a 'team of rivals'. Some networks are saying it was staged and that North Korea's regime - and Kim Jong the Crusty One or whatever his name is - came out on top of all things America.


Some people - mainly the ones who are pissed about health care reform and who want to maintain the failed policies of the previous administration - are saying we broke with a longstanding tradition of 'not negotiating with terrorists and some are even saying that we're not as safe as we were 48 hours ago because a former president rolled up to North Korea and pulled a Moses... saying "let my people go..."

Thanks for that line btw, Raven ;)

Truth be told, the WORLD just saw how good American diplomacy can be when it's guided by some masters...

And while President Obama and Secretary of State Clinton can't take officially take credit for it, what just happened was an amazing example of American diplomatic might on the global stage.

And sending in Former President Bill Clinton - who - despite any moral failings he might have had once - is probably the most astute living leader on the planet - and was a genius move by some people who, well, just understand how to play the diplomatic game.
What a brilliantly played hand of global Texas Hold 'em.... all to win the release of two Korean-American journalists.

See, I don't doubt for a minute that President Obama didn't know what was going on. I also know that he - as the American President - can't just go break bread with a global nemesis who keeps tossing missles into the ocean and rattling the saber at South Korea and the rest of the world. So him talking to Kim Jong Whatzhiznuts was obviously out. Hillary - well - she dogged the North Koreans for being - well - crazy back when these two journalists were taken into custody. They didn't take too well to that. So sending her was out. Former VPOTUS Al Gore - albeit a Nobel laureate and rich mofo from his very successful post-Vice Presidential ventures - wasn't good enough. Nor was Bill Richardson in New Mexico who was Clinton's Ambassador to the UN. Nor was Madeline Albright who was FPOTUS Clinton's SecState.
No... to get those two journalists out, Bill was gonna have to roll up on Kim Jong Ding Dong and pull a Charlton Heston as Moses... saying "LET MY PEOPLE GO..."

So now, in the dawn of this American rebirth, Bill Clinton said, "yeah, I'm in..." and he went over to assess the situation in North Korea. He came back with the prisoners. But more importantly, he came back with real-time information that we've not been able to get at all period from any intelligence service or diplomatic memorandum.

He looked at the North Korean leader. He no doubt got a good look at how things are. And even though we'll never hear about what his private thoughts and insights are - you can bet what he learned is already being ripped apart by analysts over at Booz Allen, KBR, and the NSA and CIA.

Hell, we're technically still at war with them.
But this "team of rivals" as some try to paint them to be did an amazing job at securing the release of two Americans... and they - together - tore down some more walls that divide us, them, and a very real and growing ever smaller by the day - world.
As statesmanlike as possible, the "team" of rivals just laid the smack down. They said a proverbial "AND WHAT" to the haters of the fact that say we should drop bunker busters first and talk about it later, if we're even going to talk at all.

They just said to a worldwide television audience that American diplomacy is back... and so is our position of global leadership.

Well played, Mister President and Secretary Clinton. And President Clinton -- well done. You are now the Ambassador-at-Large of the United States of America... and probably one of the most powerful private citizens in the world.
Now get to Iran and get those hikers back from President Admenijackass....

Before I go, you might be saying, "why is this important to me?"

Well, it is because we live in a new world. Borders between nations are almost meaningless. In a few keystrokes, you can be deep within China. Russia. The UK. Or even - Louisiana.

Seriously, though, this was an object lesson at what can STILL happen with the power of spoken words. Human conversations. Respect for an individual or individuals.

It shows just how strong diplomatic relations can be. It also shows that you don't need to be an elected official to make a difference.

And finally, it shows that when you engage, have a healthy conversation, in real life, anything is possible.

So go ahead and log off Twitter now or AIM. Put down your phone and the textual relationship you're having and go have some Starbucks... or even a beer... with someone.

I've found that shots of Gran Marnier can move mountains ;)

You might just be amazed at what can happen when you have a real conversation.